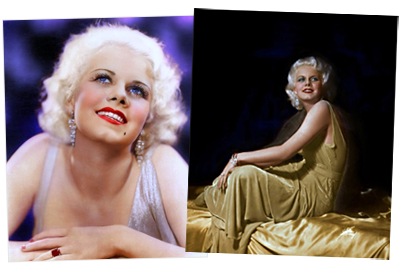 Traveling to the places I'm writing about is, for me, one of the most exciting, and indispensible, parts of bringing stories to life. This year writing has taken me from a chateau being renovated in the majestic Pyrenees, to another chateau set in a picturesque vineyard in Provence, and before that, to a tour of the home of Jean Harlow, as I was researching my upcoming novel, Platinum Doll. Even after decades, the essence of the young star sitting before that very same fireplace with her family and beloved pets, remains, and it touched me greatly, being there. I was able to see some of her personal belongings, later, to visit a 1930's era 'speakeasy', and the studio where she worked with her friend, Clark Gable. 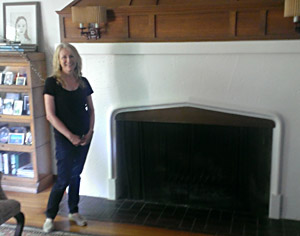 I look forward to the road ahead, wherever it takes me next, and I hope you enjoy hearing a few of these little behind the books details as much as I enjoy sharing them with you! 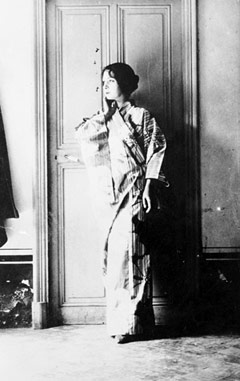 Although this book is a novel, and thus a work of fiction, I have taken the greatest care to recount events as they are known to have occurred. Various subplots, and the motivations of some of the characters, however, can only be fictionally drawn, since Eva left so little of herself behind for the world to discover. Because much of her life remains a mystery, as well as do some elements of her death, it became incredibly important to me to honor her memory by being as accurate as possible with the parts of the story that are known. Through those, I have respectfully woven plausible details and events in order to create the world of Madame Picasso.

One fact that touched me deeply while doing my research was discovering that the half-finished painting of Eva, which is mentioned toward the end of the novel, had gone missing and was found fifty years later, only after Picasso's death. It had been hidden among his private things, perhaps too dear to him to share with the rest of the world, or to part with. To support my supposition in that regard, the acclaimed historian, and personal friend of Picasso, Pierre Daix, revealed in his work, Picasso Life and Art, about Eva that "when we spoke of her two thirds of a century later, tears came to his eyes. They had truly lived together, and Pablo, when success came, needed her." 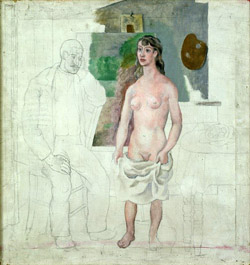 Filling in the blank spaces around the facts in a compelling and likely way, in order to join them with fiction, came in part, not just by studying Picasso's work for hints of their life together, but also by absolutely pouring over every word and nuance of Eva's correspondence with their good friends, Gertrude Stein and Alice B. Toklas. The letters, accented with little scribbles by Picasso himself, and his own added sentiments, read like a treasure trove of gossip, news, and poignant revelations about the part of her world Eva and Picasso tried desperately to keep private. They were a young couple happy, clearly in love, and with a sense of humor. In writing this novel, I was in search of the essence of the elusive Eva, and I think that was best found through Eva's own words.

Woven throughout her beautiful, sloping penmanship, the spirited underscoring of her signature, is a sense of humor, a tender heart, determination, and, most of all, a great enduring love for Picasso. I was profoundly moved by the love they shared, the struggles they endured, and the bittersweet end that I believed marked Picasso, and changed him forever. 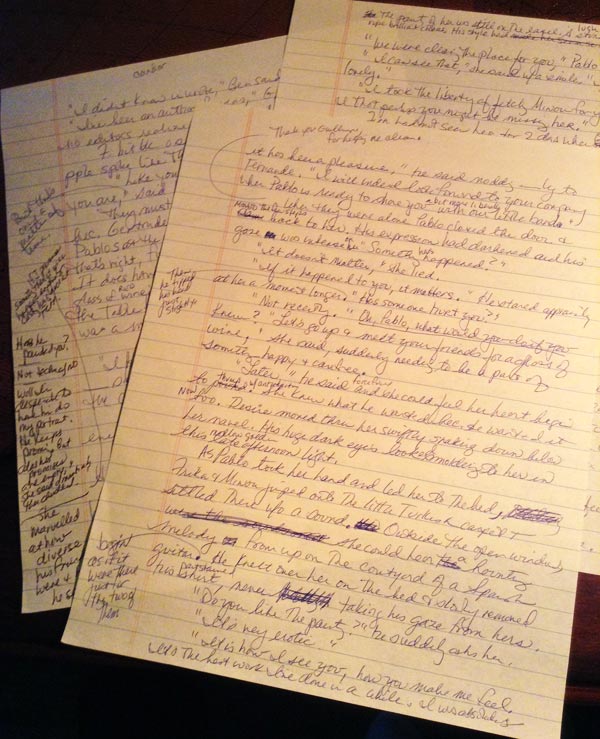 One of the best things about writing novels based on the lives of real historical figures is going to places where they lived, and worked, getting a true sense of their lives to try and breathe life into their stories for readers. Last summer, while I was researching the story behind MADAME PICASSO, I was given the opportunity of a lifetime to interview a man who, for 30 years, was a close friend of Pablo Picasso. To sit and speak at length with a person who had actually known the great icon was probably the most unique, and daunting, prospect I had yet faced as a writer. Meeting the famed French photographer at his Provence atelier initially seemed like a dream come true. 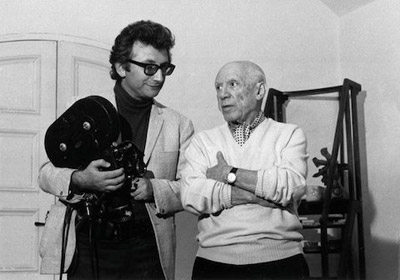 The actual event, however, became more than that, it was an adventure.

An international celebrity in his own right, Lucien Clergue certainly cuts a daunting figure, even across the internet. I had done my homework prior to our interview and found a distinguished looking, almost regal, white-haired gentleman whose intensely pointed gaze leapt off the page at me. But that seemed strangely fitting, considering the legend of Picasso's own powerful stare. Slightly unnerved by the prospect of meeting, I went on to view the iconic, sensual black and white photographs that first brought Clergue fame in the 1950's. Their abstract nature, the essence of them, reminded me of Picasso's later work, and so further tied the two men together in my mind, even before we met.

The plan seemed simple enough: I was to be met at my hotel by a liaison who would walk me through the cobbled back streets of the French village to the unmarked studio where Monsieur Clergue has lived and worked for decades. There was no time limit set for our meeting, and I was told nothing other than that he was tired after a delayed flight back from Italy. Still, my heart began racing the moment we set off into the Provencal summer heat, and the guide deftly maneuvered, with me trailing behind, the narrow, shadowy alleyways that looked like a setting for a sequence from Romeo and Juliet. Brightly painted doors, weathered by time. window boxes spilling fat geraniums, some of the window ledges above them holding discerning cats. Other windows were tightly shuttered from the midday sun. Already to me it was other-worldly, and on we walked to a massive arched door that looked like it could once have hidden a stable, at least something very large and imposing. She rang the buzzer. French pleasantries were exchanged with a secretary, before the buzzer rang again, the door clicked and we were let inside, the vaulted, shadowy foyer, and the door was slammed shut. You're a pro, I told myself. You've been at this a long time, how daunting can it be? 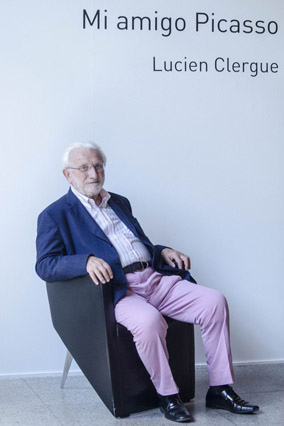 My question was answered, as my guide and I were ushered up a flight of ancient stone steps and into the commanding presence of Monsieur Clergue. Seated behind a massive carved oak desk, surrounded by soaring walls ornamented with photos of himself with Picasso, plus several priceless works of art, Clergue sank against the back of his massive leather chair, steepled his hands, raised his eyebrows and said very simply, "So then, what can I do for you?"

It was clear to me then that he was wary of writers who wanted to tread on the memory of his friend. That was something to respect and a point on which we could agree. In my novel I sought only to humanize Picasso, and thus, to honor him. So as our liaison excused herself and left the office, I decided to buck up and make the moments count. After a short exchange in which he told me of several "hit pieces" on Picasso he had witnessed recently, he admitted that he was, indeed, cautious of the motives of writers. I told him of my project, my background and my commitment to the story.

Suddenly, as if clouds had cleared away from the sun, he gave me a reserved little grin and said, "Ask away. What would you like to know about Picasso?" I had, in that moment, been given a modicum of his trust. I opened my notebook then, and went to work.

Over the next hour and a half, I heard story after story about the private Picasso, some tender-hearted things, some acts of kindness and generosity, that don't often figure into stories about the brash, womanizing artist. Even knowing what they were getting into, some of the women, Clergue explained, were happy to attach themselves to Picasso's fame and money anyway. But, he said, when it was over, there was more benefit in tell-all biographies and accusations, than in silence. Whether Clergue had a point or not, the world will never know. What I do know is that Lucien Clergue was a man staunchly defending his friend, one who was no longer here to defend himself, and I respected that.

As a novelist, it is not for me to judge Picasso's actions, or his choices. Rather, I believe it was my task -- and my incredible opportunity -- to learn some amazing private details about someone who was, first and foremost, a man, one with strengths and weaknesses, like any other man, but who, along the way, became the most famous artist of the 20th Century.

Picasso was an icon, one who loved, and who erred, who triumphed and failed. What I hope to do in MADAME PICASSO is share a bit of that man and his great love for his Eva.